Home » The 8th Principle in Action

The 8th Principle calls on each of us to take responsibility for building beloved community by dismantling racism and other oppressions in ourselves and our institutions.

I see this as a call to commit ourselves to action not only within our congregation but also within our community. UUCT’s involvement with the Capital Area Justice Ministry (CAJM) has provided an opportunity to do so.

I see this as a call to commit ourselves to action not only within our congregation but also within our community. UUCT’s involvement with the w has provided an opportunity to do so.

During the fall UUCT and 19 other congregations held house meetings to identify the critical social justice problems facing our community. Affordable housing and gun violence rose to the top.

At the same time, gun violence is plaguing our community, and is concentrated in our most impoverished and predominantly Black neighborhoods. There have been over 300 shootings since 2018 and nearly 100 shooting deaths. A small number of young Black males are in large part the shooters and the victims. Their families suffer when they get involved in violent crime by losing their child, either through death or prison.

Fifty UUCT members and friends signed up to participate in the CAJM Nehemiah Action Assembly on April 5th where 800 people from 20 congregations brought the power of the people to call on our local elected officials to take concrete steps to mitigate the crises of gun violence and the huge deficit in affordable housing in Tallahassee.

You can act on the commitment embodied in the 8th Principle by participating in the forthcoming CAJM Justice Ministry Celebration on May 17. At that celebration we will celebrate our issue victories and get the opportunity to make a financial investment in CAJM.

A second round of house meetings will begin in the Fall to define the agenda for next year’s justice ministry initiatives. 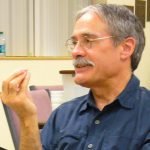 This Day in Recovery
365 Meditations