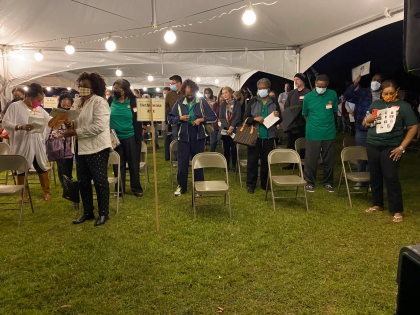 UUCT CAJM Network Members are working with CAJM research committees developing policy proposals for Affordable Housing and Gun Violence/Policing. The two committees will meet with Team Leaders from all the congregations on February 22 to share their work. At the full CAJM network Pep Rally on March 8th, the committees will reveal the action proposals to be presented to local officials at the April 5 Nehemiah Assembly.

The Affordable Housing Research Committee is focusing on excessive cost burden among low, very-low, and extremely-low income households, i.e. households earning 80 percent to less than 30 percent of the area median income and that spend more than 30 percent of their income on housing. These households, most of whom rent, comprise 30 percent of Leon County’s 115,000 households. City and county affordable housing programs have accomplished little to alleviate the shortage. Fewer than 330 new affordable rental units are expected to have been constructed between 2015 and 2024. The Committee is meeting with city and county housing officials and local and state housing nonprofit organizations to identify what needs to change to alleviate this crisis.

There have been nearly 300 shootings and 80 shooting deaths in the city of Tallahassee since 2018, typically among young men between the ages of 15 and 24, most of whom committed their first crime by age 12. The Gun Violence/Policing Research Committee has been investigating local public and nonprofit initiatives to reduce gun violence, including the city’s TEMPO program. They will be interviewing professionals who work with disconnected youth and others focused on diverting youth from the criminal justice system. They also are researching the option for the Tallahassee Police Department and County Sheriff’s Office to issue civil citations in lieu of arrests for youth who have committed nonviolent offenses.

UUCT’s target for the Nehemiah Assembly is to turn out 1000 people to show local officials the power of the people behind these proposals. You should be hearing soon from one of UUCT’s network members inviting you to participate. If you’d like to sign up now, please contact CAJM@uutallahassee.org.